You are here: Home1 / Blog2 / Sin categorizar3 / DEFINITELY WE LIKE RED

Until now, the different varieties of the Coca-Cola family or in terms of marketing, “depth of product”,  had their own design, image and publicity. This new strategy proposes a “unique brand” in order to identify all those individual brands with which until now Coca-Cola worked and configure a new model of global communication. This strategy, presented in scoop in Spain, has been extended in Russia, Singapore and Chile, although it hopes to reach all markets.

The visionary of the problem that beset Coca Cola was Zoram Vucinic, the company’s top executive in Moscow, who noticed the lack of the mother color, “the Coca-Cola red” on the supermarket shelves. The colors of the different products of the same line – black for Zero, silver for Light and gold for Caffeine free – were eating the red of its long 129 years of history.

The new design of Coca-Cola recovers the red color in all its lines: the red color as the protagonist and with details in the lower part of the packaging to identify each variety. A design that encompasses all Coca-Cola varieties and thus grants brand recognition to the parent brand. The coolest thing in history is that this project has been led by Spanish professionals. 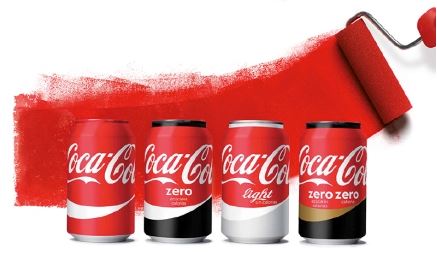 Want to join the discussion?
Feel free to contribute!

We carry out comprehensive communication projects, from strategy consulting all the way down to graphics or press office implementation. We handle a variety of disciplines simultaneously while keeping corporate brand messages consistent.

“INFLUENCER MARKETING” DOES NOT EXIST. ¿WHAT ABOUT THE ENGINE OF THE BRAND IMAGE?
Scroll to top